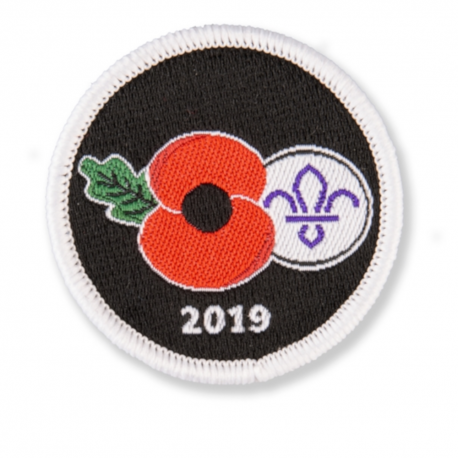 Nobody has posted a review yetin this language
Rate it

‘The Scout and Guide Shop is an authorised distributor of Scouts Shops Ltd. This is an official partnership product between the Scout Store Ltd and the Royal British Legion, where a donation has been made to both organisations for every sale’

This sew on woven uniform badge features a two petal Poppy and the Scouts fleur de lis emblem with the wording Scouts 2019. This badge can be worn on your uniform or can be sewn onto a badge blanket or poncho.

The Scouts and The Royal British Legion

As Britain entered the First World War on 4 August 1914, Robert Baden-Powell – founder of the Scout Movement – volunteered Scouts to support the war effort. The skills learned through Scouting proved very useful in carrying out a range of jobs, including working on farms, delivering messages, watching coastlines, fetching hospital supplies, and guarding railway lines.

Since the Scouts were founded in 1910, local Scout groups have taken part in the various volunteering roles within their local communities to support the Legion, including supporting the Poppy Appeal. This partnership will see many collaborative opportunities for the Scouts and the Legion to work together to raise vital funds and awareness for the Armed Forces community.

Delivery charges are calculated on the weight of your items and are added to your total order at the shipping stage.

Be the first to write your review !